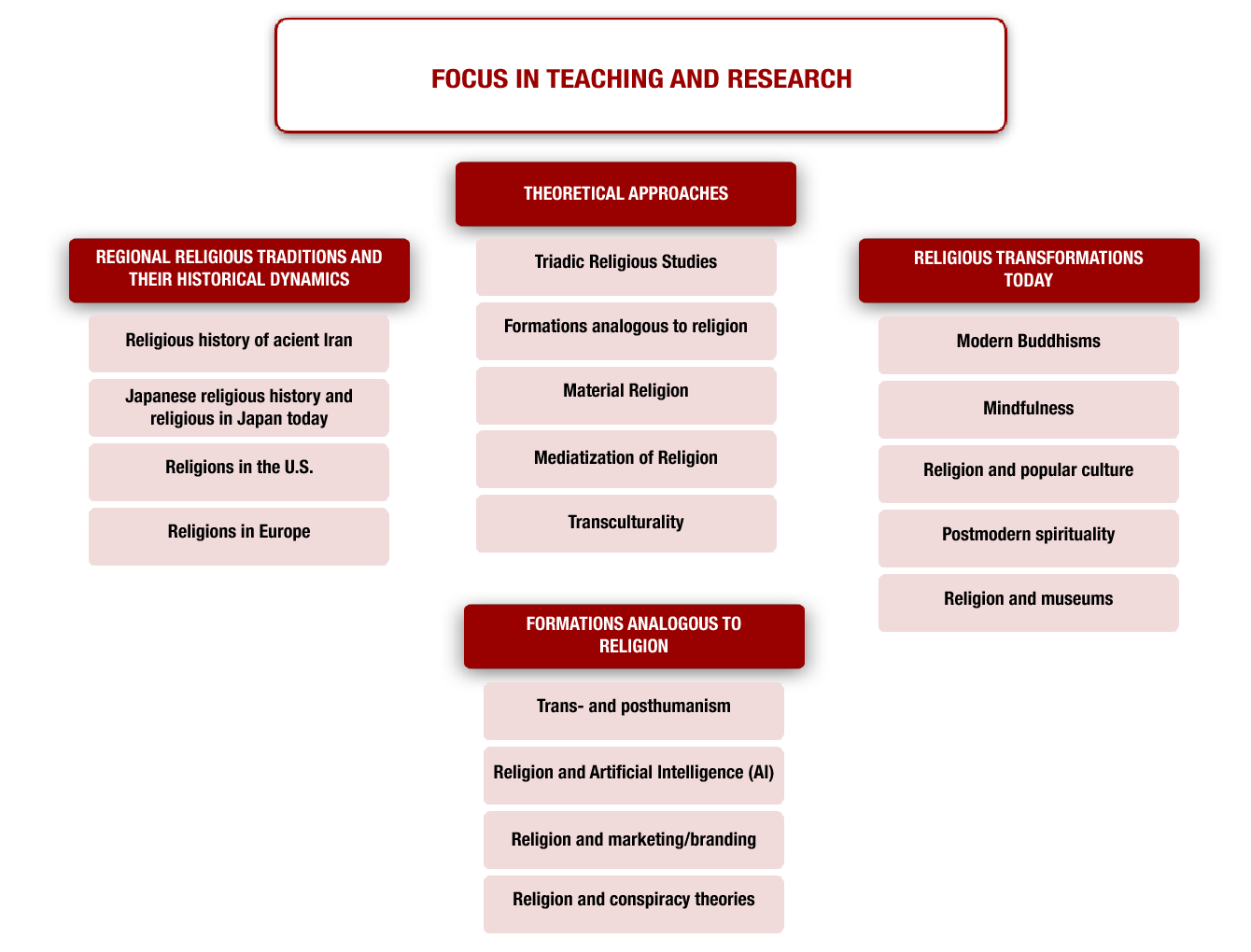 A first introduction: Religious Studies as a 'Diving Experience'

The public discourses about religions that we come across in daily life are often idealised perceptions. For example, Buddhism is perceived as fundamentally peaceful, Christianity as enlightened, and Islam as conservative. However, these clichés about religion(s) should be understood as the peak of an iceberg. A significant part of the research object of religious studies - the body of the iceberg - has to be more thoroughly investigated to become visible: religious studies scholars must take the plunge to see what is hidden bellow the waterline.

The historical complexities of religious discourses only become visible though intensive work on sources. This not only means working broadly and closely with primary and secondary sources. Finding written sources that have not been paid due attention or even purposefully ignored and separated from academic research is also important. It does not suffice to know the so-called 'holy texts' of the respective religious communities. These are often products of the discourses of the elite. Although they may include normative instructions, these don't automatically correspond to historical and current social reality. A superficial consideration of written religious histories is also not enough because such accounts often hide the (uncomfortable) historical reality and give a simplified depiction. With this in mind, popular literature about religion(s) should be read with extreme caution. It is highly likely that these works do not do justice to the historical complexities.

The social practice of religious actors does not automatically follow the idealised images of religion(s). The questions whether Buddhists are fundamentally peaceful, whether Christian believers follow the ideals of the enlightenment such as individualism or rationality, or whether Muslims categorically pray five times a day, cannot be answered with a simple yes or no, not least because the questions themselves are problematic simplifications. Quantitative and qualitative studies can be undertaken to investigate the truth behind such clichés. The idealisations often turn out to have little correlation with empirical reality. Many Buddhists live lives free of violence or are at least a required to do so by their community. Others, however, actively use violence against individuals and group, legitimising their actions through Buddhist teachings. Many Christians implicitly or explicitly support the individualism and rationality of the enlightenment, others may follow an evangelical Church whose collectivist principles, which refer back to the Old Testament, are only partially in accordance with the ideals of the enlightenment. Many Muslims carry out the prescribed prayers to the prescribed times, others choose to follow an individual interpretation of religious practice in which prayer frequency and times vary.

The material reality of religion(s) exists as an independent quality of the environment the religious actors inhabit and influences their religious interpretations. Temple architecture and meditation practices in Buddhism draw the eye and the body. Church spaces and prayer practices in Christianity lead one to kneel down and take notice; wine is drunk, and signs of the cross are made. The practice of Islamic prayer is preceded by ritual washing involving the bodies and voices of the actors that take part. All these material aspects enable and limit the interpretations of religious actors, give different sensory stimulations and prompt the bodies of religious actors to react in different ways.

The cognitive-sensual experience of religious actors can be assumed to lie at the bottom of the iceberg. Discourse, practices and materialities are produced and received by feeling and thinking individuals. Although cognitive and sensory perceptions vary over longer periods and differ between groups and individuals, we assume - with a sideways glance to neighbouring disciplines in the natural and social sciences - that there are a series of fundamental structures that remain stable over time and space. In this way, the cognitive-sensual experience of a warming fire is not identical to the sounding of a temple bells. Even apparently similar practices such as Christians fasting during Lent and Muslims fasting during Ramadan are not identical. These experiences differ because of their contextuality and their materiality. At the same time, insights into the interplay of cognition and sensuality allow materialities, social practices and discourses to be compared.